The time has come for me to confess. 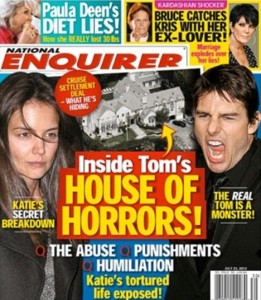 the fact that – here it comes – I find it hard to resist celebrity magazines. I stand in the supermarket queue and get sucked in by the gossipy headlines strategically placed to tempt me into wasting my money. I’ll find myself secretly pleased that the person ahead of me is taking forever – you know the type, the woman who waits until every single grocery is packed and stashed before rooting around endlessly in her bottomless handbag groping for her purse.

Why? Because this gives me a chance to flick to the contents page and then quickly scan the article relating to the most scandalous cover story, just to prove to myself what I already know internally – it’ all fluff. Hyped up, OTT, manipulative nonsense that’s not worth my time or energy.

So why do I still get sucked in? And why am I so determined to resist?

I got some clarity on the issue this week as my Leaving Certs and I revisited a comprehension from the 2005 exam paper – it was a mock celebrity interview with Irish Rock Diva Eva Maguire written by a former leaving cert student. One of the comprehension questions asked “Do you find the style of writing in this magazine article appealing?” – and discussed how this question requires a much more subtle answer than your bog standard “Identify and comment on four features of the writer’s style“. And before you freak out, you don’t need to go into anything like this detail in the exam – I’m just the kind of person who doesn’t know when to shut up!

So what is my answer? Well, yes and no.

First off the article is extremely well written but crucially the language nonetheless remains accessible, meaning it will appeal to a large target audience. The writer creates a vivid picture of Eva who “is extraordinarily beautiful and astonishingly tough, steely and ambitious. Her golden hair frames features dominated by huge blue eyes. She wears a diamond and sapphire-studded ring on her left hand…” This article offers us a clear picture of the woman and her lifestyle but it requires little cerebral exertion on our part to gain this insight into her life.And let’s face it this style appeals to most people when they pick up a magazine in a train station or a doctor’s surgery – at that moment they probably don’t want to have to grapple with complex vocabulary they may or may not understand (in fact this can be an issue for more highbrow publications like Time Magazine, The Economist and Vanity Fair who attract a very educated and literate readership but don’t sell in the large numbers that celebirty magazines do).

Secondly, sensationalist show and tell stories appeal to the gossip in all of us – like it or not it’s perfectly natural to feel curious about the lives these people lead and perhaps to even fantasise that one day it could be us flying in a private jet to our holiday home in the Bahamas! So when we read that “she has achieved head- spinning, global success, winning international music awards, packing concert venues and seeing her albums topping charts all over the world” we get a powerful reminder of why it is that so many people show up to X-factor auditions and why they are so devastated when they fail to make it past bootcamp or judges houses.

Thirdly the use of hyperbole, and the overuse of emphatic and superlative words adds to our sense that these people are somehow bigger, better and brighter than ordinary plebians like ourselves. Here “in a rare, exclusive and candid interview, the 24 year -old rock superstar reveals where she sees her destiny and for the first time shares with “Celebrity” readers some of the secrets of her forthcoming wedding plans“. If we can’t see through the manipulation inherent in the language itself we can end up falling for the excitement and drama of the writing. Perhaps this goes some way towards explaining the modern obsession with being famous – not talented or successful or exceptional – but famous for the sake of being famous. Because there is after all only one thing worse than being talked about and that’s NOT being talked about! 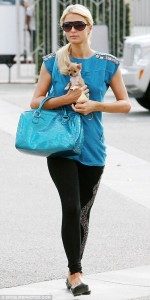 There was one other element of the writing style which appealed to me. Personally, I don’t think this student was paying homage to celebrity magazines by copying their OTT hyped-up style; I think he or she was completely taking the piss, but in a very low key and subtle way. For me this article isn’t a homage it’s a parody! Look at the way it mocks vacuous female celebrities who buy rare breeds of dog (that surely should never have existed) and carry them around in their handbag – in this article the photo shoot “shows her posing with one of her pet miniature greyhounds“. Too ridiculous to be true but we’re almost convinced because this is after all the way many of celebrities carry on! The notion that money doesn’t buy class is again hinted at when we learn more about their wedding plans and are told to “expect six hundred doves to flock the Italian sky at the moment when the wedding vows are made“. I mean ‘puh-lease’! Give me a break!

And that, my friends, is why I haven’t bought a single celebrity magazine in the past four years. Yes, I’ll flick through them at the checkout, but only to remind myself of how empty, vacuous and pathetic they really are. They promise so much yet so rarely deliver. Like this article they promise exclusive access to the inner sanctuary of the celebrity’s home; they hype up the tell-all secrets only they have managed to goad the interviewee into revealing but when all is said and done you learn little you didn’t already know. Maybe that’s why celebrity reality TV shows like the Kardashians are so popular; because they do actually give you no-holds-barred access to the most intimate details of these people’s lives (like one of them seriously gave birth on camera? Just the thought of it makes me feel queasy. That poor baba did not sign up for that!!!).

Finally although it sounds self-righteous and judgemental, there is no denying that this style of journalism promotes superficiality and excessive materialism. It elevates celebrities to a ridiculous status, pretending that their every move qualifies as ‘news’. Spend an evening in our house and you’ll find both my husband and myself regularly shouting at the telly or the radio (or both) saying that’s not news when yet another story about Brad and Angelina’s latest adoption gets higher billing that a mudslide that’s killed hundreds of people. Perhaps this is the greatest crime of all that the oxymoran ‘celebrity news’ commits.  It tells us that we should view the minute details of their daily lives as somehow more significant and important than wars, murders, natural disasters, fraud and world hunger.

Like ‘clean coal’ ‘military intelligence’ and ‘truthful tabloids’ ‘celebrity news’ doesn’t exist! And ultimately, just because it happens to a ‘celebrity’ shouldn’t mean it qualifies as news!