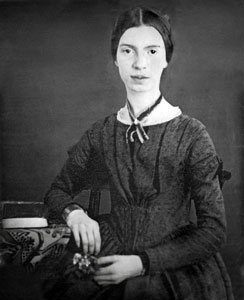 Emily Dickinson was born in 1830 and lived her whole life in Amherst, Massachusetts. She was well educated and rebelled against the extreme religious zeal of the era by refusing to publicly declare her faith in God at school. However, as she grew older, she withdrew from society, preferring to interact with the world from a distance via correspondence rather than in person. Ultimately she began to live her life as a recluse and became known locally as “The Myth”.

Relatively few of her poems were published during her lifetime and editors back then tended to edit out her unconventional use of punctuation, predominantly dashes and capitalisation, in order to make her poetry more acceptable and accessible for readers.

Dickinson’s poetry explores her morbid fascination with death and the question of whether or not there is an afterlife; mental anguish and depression; the beauty and wonder of the natural world; and the essence of human emotions, both positive and negative. There is also a wonderful, playful, humorous quality in Dickinson’s work.

Following her death in 1886, Dickinson’s poetry gained enormous success and she is now regarded as one of the greatest and most innovative writers in all of Western literature.

1. I Felt A Funeral in my Brain
2. I Heard A Fly Buzz When I Died
3. A Bird Came Down the Walk
4. I Taste A Liquor Never Brewed
5. Hope Is The Thing With Feathers
6. After Great Pain, A Formal Feeling Comes