Topic of the Week: Being Irish! 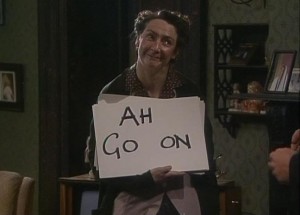 What does it mean to be Irish? It means we drink too much, swear too much, shout at the telly (especially when there’s sport on), love Taytos, have at least nine cups of tea a day, talk about the weather all the time (but none of us own a rainjacket!), have the Irish mark (left shoulder, two dots) and at least two scars from where we picked at our chicken pox, squirm whenever someone pays us a compliment (“this jacket? I got it in Penneys for a tenner“), love pub quizzes, love curry chips, love Fr. Ted, secretly wish we could win the Eurovision just one more time, think RTE is shite (but still watch it), think the Rose of Tralee is shite (but still watch it – but only because our parents have it on!), think Winning Streak is shite (it is – but still watch it when one of the neighbours is on!). We don’t like boastin’ though so I can’t tell you that we’re great craic, fierce loyal, give heaps o money to charity and wouldn’t see ya stuck if you were havin a rough time of it. ‘Cause if I said all that you might think I was gettin’ up meself like!

Sample exam questions:
2008
Write a speech in which you argue for or against the necessity to protect national culture and identity.

2007
Imagine you have a friend in another country which is considering the introduction of a ban on smoking in public places. Write a letter to your friend advising him/her either to support or not to support the proposed ban. In giving your advice you may wish to draw on the recent experience of the smoking ban in Ireland.

2001
Write a personal essay in which you explore your sense of what it means to be Irish.

2001
You have been elected President of Ireland – write the first speech you would make to the Irish people.

2001
Write a letter to Martin Mansergh in which you outline your response to his view of young Irish people.