Writing from the tree of life…

Posted on August 29, 2015 by evelynoconnor | Comments Off on Writing from the tree of life… 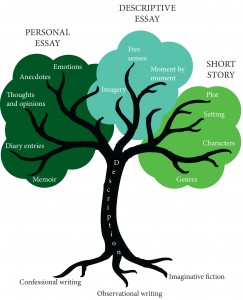 Many genres share the same roots and often, distinguishing between them can be difficult. I had this experience last year reading a piece my sister-in-law Aisling Keogh had written. After it was published a lot of people, including yours truly, asked her if it was autobiographical? Her response was just to laugh! Sure enough, on closer inspection, I registered that the main character was actually a guy, but the way she captured his voice, using first person narration, was so utterly believable, that we all struggled to accept him as an entirely fictional character.

However, even though her confessional narrator made her piece feel somewhat like a personal essay, her story also had vivid description, an evocative setting, characters who changed and developed and a plot which unfolded over a limited timeframe, so this was truly the ‘slice of life’ short stories are made of, rather than the vast limitless canvas novelists create. It was a reminder for me, trapped as I sometimes become in an exam mindset, that although genres follow certain ‘rules’, what unites them is often as powerful as what sets them apart.

With this in mind, the infographic above might help you to consider the commonalities and distinctions between the different genres of personal essay, descriptive essay and short story.

What are the main differences between a personal essay and a short story?

Take this sentence: “He walked past the window”

Now imagine I substitute a different verb. “Walked” doesn’t tell me a lot about HOW he walked, it just offers me a bland fact: he was walking. I can’t picture HOW he walked. But if I change the verb, look at how the picture in your head changes:

TIP 2. USE ADJECTIVES. The reader needs details so that they can picture the number/quantity, size, shape, weight, colour, brightness, texture, condition, sound, smell, taste, speed, temperature, age, distance, time, origin, location, emotion towards or opinion of the thing being described.

Take this sentence: “The car raced through the town”

I’ve got a good verb – “raced” but otherwise I know very little about either of the things being described – the car or the town. If I add a few adjectives, suddenly these nouns come to life!

“The battered blue Mini raced through the sleepy seaside town”

“I could see a blue light flashing in the distance. My head was throbbing and when I lifted my swollen hand to my temple, sticky crimson blood smeared my fingertips. A low moan of pain was just barely audible amid the screaming sirens and the screeching whirr of the chainsaw that was going to cut me out of the train wreckage. It was only later I realised that I was the one moaning. Everyone else was dead”

“I could see a vivid blue light flashing in the far-off distance. My heavy headachy head was throbbing and when I lifted my swollen sore hand to my aching temple, sticky, crimson blood smeared my shaking fingertips. A low moan of intense pain was just barely audible amid the screaming sirens and the screeching whirr of the vicious chainsaw that was going to soon cut me out of the twisted train wreckage. It was only later I realised that I was the one moaning. Everyone else was dead”

Finally, some writers prefer a very minimalist style to keep a fast pace in their writing – something like this:

“I could see a blue light flashing. My head was throbbing. I lifted my swollen hand to my temple and blood smeared my fingertips. A moan of pain was just barely audible amid the sirens and the whirr of the chainsaw that was cutting me out of the train wreckage. It was only later I realised I was the one moaning. Everyone else was dead”

Blind people experience the world as a rich tapestry of sounds, smells, textures and tastes. Just because they are blind does not mean their life is any less intense but they have tuned in to a way of seeing the world that does not need eyes.

This is what you need to do as a writer. If you are describing a place, imagine that you walked into that space blindfolded. Would you still know where you were? How? Close your eyes and imagine the sounds and smells, the taste of the air, the fabrics and the feel of the furniture that would indicate to you where you were even if you could not see…

Here’s an example of descriptive writing which relies on sound, smell, texture & taste.

“The clink of instruments falling into metal trays and the cloying smell of drills and disinfectant filled me with despair. I was back here again, in the place from all of my nightmares, but this time was real. Now I shimmied onto the cold blue leather and the whirr as the motorised chair came to life added to my rising panic. As it stretched out beneath me, I opened my jaws until they ached with the effort; tasted the powder of the tight white gloved hand as it pulled at the corner of my mouth; squeezed my eyes shut and dug my fingernails into the soft palm of my trembling hand to distract myself from the pain. Here it comes, here it comes, the prick and the sting and the cold cold kiss of the needle, then the flooding numbness, and the feeling of temporary relief, all too soon destroyed by the searing screech of the drill as it spins hideously closer. Save me, I want to scream, but I’m already almost choking on my own spit, pooling at the back of my mouth. I wiggle my eyebrows at the nurse and she obligingly slips in the suction tube to stop me from drowning. Why is it, I ask myself, as I stare at the ceiling, weary and numb and exhausted, that a visit to the dentist always feels like a brush with death?”

Instead of saying “I walked into the dentist’s office and sat on the chair” you describe the event so that the reader feels drawn into the experience (see description above).

If you are writing a descriptive essay, then a series of seemingly unrelated word pictures (like this one) with an overarching theme (“The beauty & ugliness of the world”) would work fine.

However, if this is part of a longer story, it needs to go somewhere. It needs to have a point. Perhaps it turns into an unexpected love story where the next thing the narrator notices is how lovely the dentist’s eyes are, and how gentle his hands are, and how kind his laughter. Perhaps this is a character study and the narrator is attempting to explain how she became addicted to prescription painkillers; maybe it all began with this visit to the dentist? In storytelling, it doesn’t matter where it’s going but each event that’s included is usually leading somewhere, capturing some truth, revealing something previously hidden. Unless of course it’s a Waiting for Godot-esque meditation on the fact that we spend our lives waiting for something to happen, but often very little does…in which case, carry on. Nothing to see here!

This entry was posted in Composing, Leaving Cert Paper 1. Bookmark the permalink.