Posted on August 29, 2015 by evelynoconnor | Comments Off on Less common Question Bs 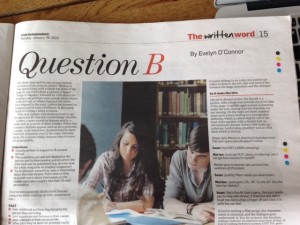 ‘My News‘ may well be one of your earliest memories from primary school. Written in that special copy with a blank top third of the page so you could draw a picture, it began ‘Today is Tuesday‘, followed by a bit about the weather and perhaps some gossip about whose tooth fell out, or whose knee got cut when they tripped in the yard. Letters too formed an integral part of early childhood, in the yearly ritual of writing a letter to Santa.

This may explain why students tend to opt for Question B’s that feel comfortingly familiar – a letter, a news report or feature article, a radio talk or a series of diary entries. When less common formats appear, such as an a proposal, a script, or an interview, students tend to steer clear out of anxiety, even if the topic interests them. It’s a shame really, because they’re every bit as accessible.

The tone tends to be very informal, you write as you would speak – this is, after all, a conversation that then gets written down.

Keep the questions short and the answers fairly long. Pre-prepared questions will only get you so far – a good interviewer creates new questions on the spot which respond to what the interviewee has just said and which dig a bit deeper to get more info.

While there are no hard and fast rules for this format, a proposal falls more or less into the category of the language of information. You should get to the point, avoid any waffle or repetition, pay close attention to structure (make sure it’s well laid out and organized) and use clear, concise language to get your message across.

Remember however, that if this proposal is going to be selected from lots of other proposals you’ll need to argue your case, persuading your audience that you are the best possible candidate and/or your idea is the best possible idea for whatever it is that you are proposing to achieve. Make it clear who will do what? when? and why?

Step 1: Introduce your idea. Begin with a brief sentence outlining what it is you propose to do / create and mentioning who your product / service or idea is aimed at.

Step 2: Flesh out the details. The body of the proposal will offer specific details on the project, outlining exactly what you propose to do/create, step by step.

Step 3: Include rationale. (1. selling points, 2. research, 3. expectations 4. expertise). This is where you explain why you believe this approach will be effective (in achieving whatever it is the people paying for this project want to achieve). Focus on the unique selling points of your idea. Have you tested this idea on a sample group? Discuss the specific needs of your target audience and how your project will meet their needs and expectations. You may wish to briefly outline why you are the perfect person to lead this project (relevant experience, qualifications, personality).

Step 4: Timeframe and financial plan. Specify how long this project will take from start to finish. Include an estimated cost and mention that a detailed set of accounts for projected costs (and potential profits if applicable) is included in the appendix.

Writing believable but engaging dialogue is harder than you might think. Sometimes you write something you think works, but when you read it out loud your reaction is ‘what was I thinking? No-body talks like that in the real world‘. The best way to test your dialogue for authenticity is to hear it spoken aloud. If it sounds fake, cross it out and try again.

The layout is slightly different depending on whether you’re writing for stage or screen. However, it’s doubtful you’d lose marks for such pedantic details in an exam. The quality of your dialogue would be the primary concern of whoever was marking your script.

If you’re writing a scene for a stage play, the name of the character goes on the left, followed by a colon, then their dialogue. Never write under the character’s name – this makes it easier for the actors to follow whose line is next when they’re rehearsing the play. Stage directions describing the characters clothing, hairstyles, the setting, props, furniture, telling the actors what actions and body language to use, where to move etc…are written in italics. If you’re writing in an exam so you can’t use italics, keep to the left edge and leave a line between the stage directions and the dialogue.

Stage is divided in two. Stage left is a teenage girl’s bedroom. Stage right is a 1980’s kitchen. A table with an ashtray full of cigarette butts sits in the centre. Four chairs surround it.

Stage left, Marian is dancing to loud pop music. The door opens but she doesn’t notice.

Sean: She’s fine M. Don’t panic. She just needs you to help with dinner. I tried but she didn’t trust

me not to chop a finger off and stick it in with the carrots!

If you’re writing a film script, the character name is centered, and the dialogue goes underneath it. You let us know the location, setting (interior or exterior) and time of day. If you’re cutting between scenes, CUT TO: goes on the right hand side of the page. If you’re watching one scene, but listening to voice over from characters who are elsewhere, indicate that with V.O. in brackets beside the characters name.

Sean get OUT! Jesus (muttering) can I not get five minutes to myself?

Mother stands at kitchen window, knife in one hand, carrot in the other, staring vacantly. Her eye twitches but otherwise she is completely still.

Oh. OK. Is she ok? Did she take her tablets?

She’s fine M. Don’t panic. She just needs you to help with dinner.

I tried but she didn’t trust me not to chop a finger off and stick it in with the carrots!