It’s not easy to be succinct. Sometimes it’s easier to just waffle on instead of getting promptly to the point and moving on. With this in mind, I’d like to recommend some board games that force you to be brief, that challenge you to think critically and that demand creativity and imagination – all skills students need to have in abundance. 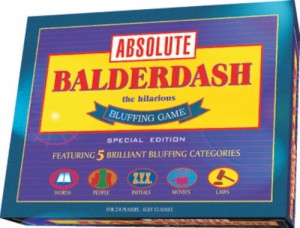 The first is a bluffing game. Each person takes it in turns to be the card master. You choose a card, select the category that corresponds to where you are on the board, then read out a prompt (eg. Law – “In Princeton, New Jersey, it is a crime for two people to…“) and everyone scribbles down what they consider to be a plausible answer.

Then the card master collects up the answers, reads them all out, including the answer printed on the card (but they’ll have written it out on paper so no-one knows which is real and which is fake) and everyone bets on what they think is the ‘real’ answer. If you guess correctly, you move forward two spaces – but what’s far more fun is if that you also move forward one space every time someone guesses that your bullish*t answer is the real one.

Here are a few examples from each category:

“In Princeton, New Jersey, it is a crime…. for two people to slurp soup”

“In Munich, Germany, it is illegal for young women wearing bikinis to…. play rock and roll music if they are wrestling in a pool of mud”

People: guess what they’re ‘famous’ for:

Charles Osborne? He was a pig farmer who could not stop hiccoughing for 68 years.

Initials – guess what they stand for:

Movies – guess the plot from the title:

“The Devil Bat” – 1940’s horror film about a deranged doctor who trains his giant bat to kill people who are wearing a certain shaving lotion.

“This Could Be the Night” – Romantic melodrama about a prim and proper schoolteacher who starts work in a nightclub owned by a gangster.

“The Day the Fish Came Out” – Sci-fi satire about a plane carrying nuclear warheads that crash lands on a Mediterranean island. Starring Candice Bergen.

Utterly silly but great craic, especially if you’ve got a bunch of witty people with wacky imaginations playing.

Two other board games that ask you to think quickly (but which demand perhaps a less quirky imagination) are Articulate and the brilliant Irish game 30 seconds, which is a variation involving an egg timer and questions specifically geared towards an Irish audience. Might make a good Christmas present for someone! 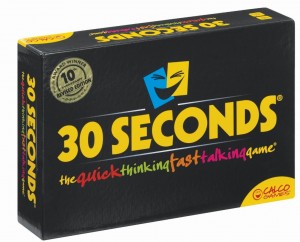 This entry was posted in Uncategorized. Bookmark the permalink.

2 responses to “Games for learning…”