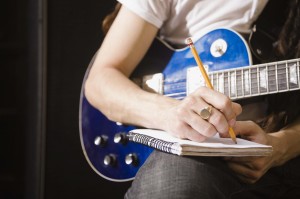 For the past few weeks, my TY’s and I have been doing some songwriting. I’m not a music teacher but I love music and my secondary school years were filled with songs and songwriting and gigs and busking and the sheer joy of performing. I took part in the school talent show every year until eventually they invited me to appear as a guest. I sang my own original song and it really struck a chord. I know this because the title – “Psycho”  – also became my nickname for the foreseeable future!!!

Anyway, here are two of the tracks we recorded – “Alive“, written and performed by Rebecca and “Something to Remember Me By” written by Neasa and performed by me (“I don’t sing Miss” she said. “Just write it” I said.… “I’ll sing it if I have to“… I did!)

I thought that was it until I met the BEO team at Féilte, the World Teacher’s Day celebration in Dublin this weekend (I promise to blog about this anon). Now it turns out if we can translate one of our original songs into Irish, or write our own new original song as Gaeilge, we could win €3,000 first prize!!! So I guess we won’t be packing away our guitars just yet!

Anyway, the competition is open to all secondary school students and youth clubs. There’s a bigger competition you can also get involved in where you organise a gig in your school, and the prize money for that is 1st prize €4000, 2nd prize €3000, 3rd prize €1,000 and a few runner up prizes of €500.

I’m sure all this money ching chinging around has got your attention, so if you want to find out more click this link: www.beoireland.com or find these guys on twitter @beoireland …

This entry was posted in Composing, Discussions, Teachers. Bookmark the permalink.