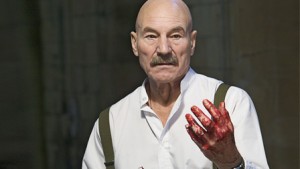 Macbeth is a fascinating character not least because of the soliloquies. I guess you could say that what’s truly tragic about Macbeth is the gulf between his behaviour (which is awful) and his personality. He is flawed, yes, but he is also human: full of ambition, plagued by conflicting emotions, eager to please the woman he loves, terrified of his inability to control events as they spin out of his control. Thus he lashes out at everyone, alienates his wife, loses her to her madness and despair and ultimately finds himself utterly alone having lost everything yet he is unable or unwilling to surrender or admit defeat and so instead he fights to the bitter end.

The purpose of any soliloquy is to reveal more about the

In the case of Macbeth, without the soliloquies we would have little if any sympathy for him and would view him merely as a bloody villain whose behaviour is unforgiveable. Despite having a loving wife, the respect and admiration of his peers and significant rewards for his bravery on the battlefield, Macbeth decides to commit the ultimate crime of regicide and to seize the throne for himself.

So if we weren’t aware of the moral and emotional turmoil going on inside his heart and soul, if we didn’t know that he was full of misgivings before the murder of Duncan and immediately remorseful afterwards; if we did not witness the scorpions in his mind and ultimately the point of suicidal despair he reaches following his wife’s death we would not see the point of this play. In fact we would probably cheer for the forces of good as Macbeth’s bloody tyrannical reign is brought to an end.

NOTE: The soliloquies are particularly important after the banquet scene once he stops confiding in his wife because without his conversations with her, the soliloquies are the only thing left offering us an insight into his thoughts, feelings and motivations.

Bearing all of this in mind, in the case of each soliloquy you could do the following:

CONTEXTUALISE – when is it delivered? What happens immediately beforehand? Does this prompt the ‘outburst’ of the soliloquy?

ANALYSE – what exactly is revealed from what the character says in each soliloquy? In the case of Macbeth we see that he is:

(a) initially acutely aware of the difference between right and wrong and determined to listen to his conscience.

(c) paranoid and fearful that Banquo will destroy him

Can you identify the effect of Macbeth’s soliloquies on the audience? Most obviously, they allow us to identify with him despite the fact that he is an antihero. Secondly they give us an insight into his thoughts and motivations and thus allow us to understand him on a deep level. Finally, they should frighten us – how can an essentially good man be so completely and utterly transformed into a bloody tyrant? Is it possible we would behave in a similar way to cover up a terrible crime we had committed?

Soliloquy 6 = Act 5, scene 3 “That which should accompany old age as honour love obedience troops of friends I must not look to have”

For each soliloquy try to figure out the following:

You could also go on youtube and look for performances of each soliloquy and if you click on this link http://nfs.sparknotes.com/macbeth/page_10.html you’ll find modern translations side by side with the original Shakespearean language. You can search by scene so you can just look at the soliloquies if you want to…

By the way, you don’t have to discuss EVERY soliloquy if a question comes up on soliloquies in the exam – you could look at three or four in greater detail rather than skimming over all of them. Remember, the examiner is rewarding you for what you DO say that’s relevant to the question and well written NOT punishing you for leaving things out. In fact, in order to write a coherent answer you will HAVE to leave out the vast majority of things you know about the play and ONLY discuss those things which are relevant to the question asked. This applies to every question not just this one!

Posted on January 24, 2012 by evelynoconnor | Comments Off on Hamlet’s soliloquies

I don’t propose to offer a lengthy discussion of every soliloquy in the play. You can do that yourself. Or google it!

There are 7 soliloquies delivered by Hamlet and one by Claudius.

The purpose of the soliloquies is to reveal more about the thoughts, feelings, personality and mindset of the central character(s).

In the case of Hamlet, without the soliloquies, his behavior would make absolutely no sense. His father has been murdered and then reappears in the form of a ghost, ordering him to get revenge, restore order to the Kingdom and claim what is rightfully his – the throne. So if we weren’t aware of the moral and emotional turmoil going on inside his heart and soul, if we didn’t know that his mind was a constant battleground, we would not sit through this play. In fact we would probably boo at the central character and possibly even start taunting him for his inaction and cowardice.

Bearing all of this in mind, in the case of each soliloquy you could do the following:

CONTEXTUALISE – when is it delivered? What happens immediately beforehand? Does this prompt the ‘outburst’ of the soliloquy?

ANALYSE – what exactly is revealed from what the character says in each soliloquy? In the case of Hamlet we see that he is

(a) highly self-critical (this links in to the idea that he is a very self-aware tragic hero – unlike Lear, Hamlet is aware of his fatal flaw from the outset)

(b) morally aware (this links in to the idea that he is a very noble person whose delay is partially due to his desire to ‘do the right thing’ (he double-checks that Claudius is actually guilty) and partially due to his profound sense that violence is wrong (even if he would be obeying a powerful code of honor and revenge when engaging in this violence).

(c) deeply philosophical (his tendency to over-think things leads to his suicidal depression and also contributes to his inaction. One benefit emerges, however, in the beauty of the language created by Shakespeare to consider some of the greatest moral, spiritual and philosophical ideas known to humankind. Without these soliloquies the world would be a lesser place. And I mean that sincerely).

Can you identify the effect of Hamlet’s soliloquies on the audience? Most obviously, they allow us to identify him as the ‘hero’ of the play. Secondly they give us an insight into his thoughts and thus allow us to understand him on a deep level – otherwise we’d just be shouting ‘get on with it’ at the stage and possibly throwing things too! Finally, they allow us to sympathize with his plight, even to emphatise on some levels – yes I know none of us have ever had to avenge our father’s murder and kill our Uncle for shagging our mother, but we can emphatise with the idea of feeling obliged, even compelled to do something but being unable to muster up the will to actually do it (generally speaking that might be washing dishes, doing homework or breaking up with someone. Not quite as dramatic as what poor Hamlet is going through).

Comments Off on Hamlet’s soliloquies