Posted on August 29, 2015 by evelynoconnor | Comments Off on Visual Imagery 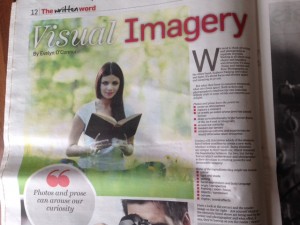 We tend to think of writing and photography as separate domains. Writing is all about word choice and sequence and structure; it’s about rhyme and rhythm and flow. Photography, on the other hand, is about framing and colour and light; it’s about focus and shutter speed and zooming in or out.

But what they have in common transcends what sets them apart. Both writers and photographers combine the raw materials of their craft in ways which can surprise and delight.

Photos and prose have the power to:

Context will determine which of the elements listed below combine to create a new work, whether written or visual. Some elements are unique to their medium; others transcend the boundaries between the two, but the key feature which unites writer and photographer is their devotion to creating powerful and memorable imagery.

Some of the ingredients they might use include:
• colour
• light and shade
• setting
• facial expressions and body language
• angle / perspective
• framing / zoom / focus
• objects / symbolism
• senses
• rhyme / sound effects
Have a look at the extract and the accompanying image below. Ask yourself which of the elements listed above are being used by the writer and photographer and what effect, if any, they’re having on you the reader / viewer? 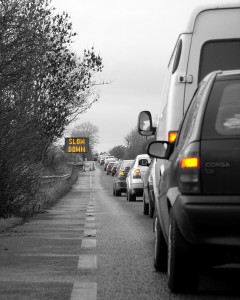 I didn’t plan it. I just desperately wanted to get home and not be in that car anymore. Mum had the heat pumped to the max to keep the windscreen clear but somehow the heat was adding to the clutter in my head, like the fog had evaporated from the glass and translocated into my brain. Then we hit the tailback. Miles of orange lights winking into the distance and suddenly I couldn’t bear it anymore. The silence and the heat and the oppressive weight of the tension between us. So I got out. Slammed the door, but gently, just enough so she wouldn’t have to reach over and close it again, straining the already torn rotator cuff in her left shoulder.

And then I walked. Slowly at first, glancing in at sad faces trapped in time. Rolls of fat cascading from a stubbly chin chowing down a breakfast bap; ruby lipstick caressing the wrinkly mouth of a glamorous granny; then a crying baby and a screaming couple and suddenly I pick up speed, turning to the landscape, the barren trees and the empty fields, the turloughs and the reeds and my heart rate lifts and I think ‘she’ll never catch me’ and all I can feel is the heat as my muscles strain and stretch and sing and I pray the tailback lasts forever.
Now, imagine you’ve been asked to answer the following question:

‘Imagery, both written and visual, contributes to the tense atmosphere in this extract’.
To what extent do you agree with this statement? In your answer, refer to both the written text and to the photograph which accompanies it.

I find I’m not entirely in agreement with this statement, as I find the atmosphere in the photograph quite soothing. The imagery in the written text undoubtedly contributes to the tension we experience as we read. The writer zooms in on the heat and the windscreen condensation to effectively re-create the sense of claustrophobia felt by the narrator. As she observes that “somehow the heat was adding to the clutter in my brain, like the fog had evaporated from the glass and translocated into my brain”, the emphasis on confusion, on fog and on feeling too overheated is compounded when they hit a tailback. All of this imagery powerfully evokes the narrator’s frustration and her use of auditory images later in the passage, in the ‘crying baby and screaming couple’ ramps up the tension even higher.

However, in my opinion it is exclusively in the interaction between the written and visual elements that a tense atmosphere might be ascribed to the photograph. If I had seen the photo, but had not read the passage which accompanies it, I think the dominant emotion I would feel looking at it is amusement, not tension. Taken by itself, it’s a funny photo. The photographer has cleverly emphasised the irony of being told to ‘slow down’ when you’re stuck in an endless tailback by stripping the image of colour entirely, but retaining the ‘miles of orange lights winking into the distance’ in the brake lights of the cars and in the neon sign. The orange light against the black and white background catches your eye and forces you to register the humour of the situation the drivers find themselves in. Furthermore, the bare trees on the horizon add an autumnal feel and for me, the atmosphere in the photo, if examined in isolation, is quite restful. I will admit, however, that when you read the passage and then look at the photo, you do find yourself thinking less about the season and more about the frustration the drivers of these cars must be feeling as they sit there trapped in their cars.

This entry was posted in Comprehensions, Leaving Cert Paper 1. Bookmark the permalink.