Othello: from love to hate! 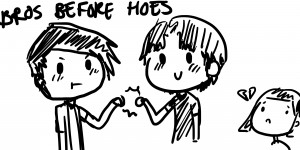 My class labelled the temptation scene “BROs B4 HOEs”. Basically, faced with the choice of trusting Iago or trusting Desdemona, Othello trusts his longterm friend over his new wife, hence the bros before hoes reference!

However, that doesn’t answer the question of how the hell Othello transforms from trusting his wife completely to deciding to murder her, in the space of a single scene?

At the beginning of the Temptation Scene (Act 3, scene 3), Desdemona assures Cassio that she will not rest until he regains his former position. In her own words, she says “if I do vow a friendship, I’ll perform it to the last article” and she even states “thy solicitor shall rather die than give thy cause away“. True to her word, when Othello enters she tries to cajole him into calling Cassio back and when he refuses saying “some other time“, she continues pressing the matter, questioning repeatedly “shall it be soon?” “shall it be tonight at supper?” “Tomorrow dinner then?” “Why then tomorrow night; or Tuesday morn; or Tuesday noon, or night; or Wednesday morn”. This is undoubtedly Desdemona at her most irritating, yet Othello finds her behaviour cute, not nagging. Immediately after she leaves, he looks after her fondly, claiming that he loves her deeply and that without her his world would be in tatters “Perdition catch my soul but I do love thee! And when I love thee not, chaos is come again“. However, by the end of this scene, Othello is plotting her death!

Here are the tactics Iago uses to convince Othello that Desdemona is cheating on him:

At this point Othello says “Now do I see tis true“, then he falls to his knees proclaiming “All my fond love thus do I blow to heaven: ‘Tis gone. Arise black vengeance from the hollow hell! Yield up, O love! thy crown and hearted throne to tyrannous hate“. Iago also swears a solemn vow “Witness you ever burning lights above!…that here Iago doth give up the execution of his wit, hands, heart, to wrong’d Othello’s service!” and at this point Othello swings into battle mode, ordering Iago to kill Cassio, planing a “swift means of death for the fair devil” Desdemona and finally giving Iago the promotion he wanted all along “Now art thou my Lieutenant“.

This entry was posted in Othello and tagged Othello, transformation. Bookmark the permalink.

One response to “Othello: from love to hate!”