Your analysis of the photo should be so specific that the reader can picture it without seeing it. However, remember you are commenting on aspects of the photo not simply describing it (that’s the equivalent of telling the story instead of analysing it – never a good idea!).

The image of the lady passing the soldier (image 3) had the greatest impact on me. I think this woman decided to dress up because she is determined to carry on with her life as usual, despite the presence of soldiers on the streets of her city. Dressing up allows her to feel powerful and important. I particularly noticed her pearls in this image, as they are traditionally a symbol of wealth. Clearly as an unarmed woman in a besieged city, she felt powerless and threatened. Walking the streets of her city dressed up to the nines is an act of defiance against the occupiers – the caption under the photo says that it was taken during the siege of Sarajevo.

It is possible (but unlikely in my opinion) that she is trying to impress the soldier – her look is one of disgust and contempt, not seduction. She is unsmiling, she holds her head up high and swings her free arm as though she hasn’t a care in the world. This has to be an act – the man in the foreground is carrying a heavy machine gun. Judging by the distance between her two feet she is taking quite long confident strides, or at least as long as she can with her tight skirt on! Although the soldiers head is out of shot, from examining her line of vision, I’d say she is looking directly at him, almost as a kind of challenge to his authority. She appears entirely unthreatened & unintimidated by the weapon he is carrying.

The soldier in the left foreground appears quite relaxed, judging by the cigarette perched between two fingers of his right hand. However, he seems prepared to use his weapon as both of his hands are resting on it, ready to spring into action if necessary. By contrast, the woman seems to be going somewhere specific, on a mission. She is doing her best to appear nonchalant as she strides past. The two images create a great contrast because it is so unexpected to see a woman in upmarket fashionable clothes walking casually past a soldier in a war zone. The focus remains firmly on the woman, however because her body is in frame whereas the soldier’s legs and head are cut off, rendering him anonymous, a nameless, faceless, unknown soldier. 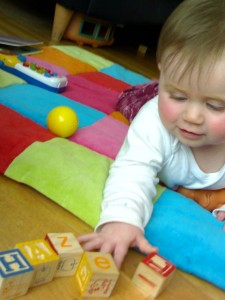