I love this cartoon from Natalie Dee on fanpop.com 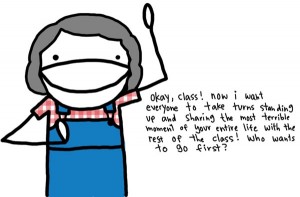 Before Christmas I got my TYs (over 50 of them) and my Leaving Certs to write personal essays. Their essays for the most part were funny, sad, moving, at times mad and in many cases very very brave. Among other things I read about a childhood obsession with goldfish; a superhero granny; being an only child; falling into a river in front of the boy you absolutely love love love; suicide; a haunted church; spontaneous uncontrollable crying spells; and being wrapped in tin foil and carried off a volleyball court on a stretcher…

I also discovered that “a commode is the love child of a wheelchair and a portaloo!”

I did notice however that very occasionally a personal essay didn’t ‘ring true‘. It’s hard for me to explain how I knew that the writer was inventing or embellishing a sad story (leaning towards or sometimes completely inventing a fiction) rather than drawing on real life experiences (fact) but when I asked a couple of students about it sure enough they said what they’d written about hadn’t actually happened but they felt compelled to give the personal essay a tragic ending in order to engage the reader emotionally.

Oddly, it had the opposite effect – I enjoyed these essays up to the point where they transformed into melodrama and then I just somehow knew that the writer was trying to force a reaction out of me.

Have a look at this beautiful personal essay – but be warned:

(2) You could never write this. You are not a thirty-something-yr-old widower with a toddler and a dead wife. You are a 17 or 18yr old Irish leaving cert student and this is the perspective you MUST write from when you write a personal essay in the exams because fundamentally a personal essay IS NOT A SHORT STORY and IS NOT FICTION. Of course you can write about something funny that happened to someone else and pretend it happened to you; of course you can exaggerate for dramatic or humorous effect. But try to write what you know or your essay is in danger of coming across as insincere and false.

Now have a look at this personal essay, whose tone is much more philosophical and opinionated rather than emotional – the tone is completely different but there is no question that it also falls into the category of personal essay.

Here it is (with the longest url in the history of life the universe and everything):

I guess I just want you to realise that you can write a serious opinion piece; an emotional admission; or a funny satire and ALL will still qualify as ‘personal essays’ as long as you write in the first person (“I”) and as long as you are yourself (Irish teenager) not a fictional narrator (a witchdoctor, a talking rubbish bin or a homeless wino).

For clarification of the difference between the personal essay and memoir check this out: http://meghanward.com/blog/2012/08/21/personal-essay-vs-memoir/

That’s all for now folks. Good luck with the mocks revision!

Here are a few personal essay titles that I gave to my Junior Certs today. I’m really just posting them here so I’ll have them for again! Most of them are taken from a random selection of previous exam papers. Some of the titles that usually come up lean in particular directions – towards descriptive short stories or dialogue heavy ‘scenes’; others towards journalistic opinion pieces – so I’ve avoided them deliberately because I want today to be about the art of personal writing. What these titles have in common is that they ask you to insert yourself into the essay, to reveal who you are as a person – your thoughts, beliefs, experiences, hopes, dreams, personality and sense of humour.

p.s. Another title I made up recently that produced some interesting responses from Leaving Certs was “Write a personal essay about some of the funniest/most embarrassing moments of your life so far”. 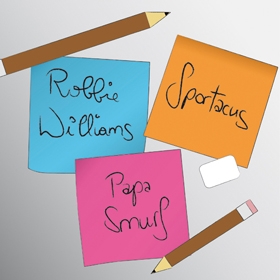