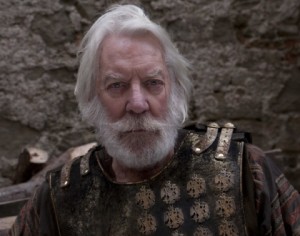 Kingship is an oft discussed theme in the play Macbeth and it’s hardly surprising – we are presented with so many Kings it can be hard to keep track of them… but God loves a trier so here goes.

The first King we meet is Duncan. He’s waiting anxiously for news of not one but two battles (against the rebel Macdonwald and an invading Norweigan army) and he’s relying on his two great generals Macbeth and Banquo to win the day.

You need to form an opinion, good or bad, of Duncan – is he a good King or not? Interpret the facts don’t just list them. It doesn’t matter whether you take a sympathetic or a judgemental attitude towards him as long as you don’t sit on the fence…

Those who champion Duncan point out that he inspires great love and devotion from his army, particularly his warrior cousin Macbeth who carved his way through to the enemy then “unseamed him from the nave i’ th’ chops and fixed his head upon our battlements“. Duncan shows no mercy to the traitorous Thane of Cawdor (who fought alongside the rebel Macdonwald) ordering his immediate execution but he does reward loyalty, offering this title to Macbeth and paying Macbeth the great compliment of initiating a royal visit to his castle. This is a shrewd political move on Duncan’s part – he recognises that he needs to keep the brave fearless Macbeth onside and feels this is a good way to do it. Duncan had no possible way of knowing what Macbeth was plotting against him; after all Macbeth is his cousin; he had just risked life and limb to keep Duncan on the throne and is widely regarded as an “honest” and “worthy gentleman“. Duncan is also savvy enough to pronounce that “we will establish our estate upon our eldest Malcolm” so that if his life is threatened again there will be no confusion as to who’s going to ascend to the throne after he dies.

[NOTE: To understand the significance of this announcement fully you need to appreciate that the modern notion of succession didn’t apply here. The King could name anyone he wanted, it didn’t have to be his eldest son, it could be whoever he considered most worthy – his brother, a middle or youngest son, or the bravest warrior in his army. In fact at this time in Scotland if the King died suddenly there would be a conference of all the warrior chiefs and they would decide amongst themselves who should take over as King. So Duncan’s announcement really dashes Macbeth’s prior hope that “if chance will have me King, why chance may crown me without my stir“].

Those who criticise Duncan point to the fact that not one but two armies have taken arms against him. He doesn’t seem to inspire loyalty and must be in some ways perceived of as weak if his nobles so openly rebel against him. He also lacks the wisdom to offer equal reward for equal service – he gives Macbeth a new title and bestows the honour of a royal visit to his castle but offers Banquo only a measly hug. Luckily Banquo’s not the jealous sort but it does give us some insight into how Duncan may have inadvertantly made enemies in the past through tacklessness and favouritism. Duncan’s decision to visit Macbeth’s castle can also be interpreted as a foolish decision; evidence that Duncan is a gormless overly-trusting individual who fails to learn from his mistakes. After what’s just happened surely he should be upping his security detail and holing himself up in his own castle until he is absolutely sure who he can and cannot trust! A little paranoia wouldn’t go astray here. Furthermore his pronouncement that “we will establish our estate upon our eldest Malcolm” was bound to raise some hackles amongst the more ambitious Scottish nobles (see the rules of succession above) – he should have known this and been extra careful while this news was sinking in.

Like him or lump him, we get our clearest sense of Duncan’s reign from the man who’s plotting to kill him. Macbeth admits that Duncan is “here in double trust” and acknowledges that Duncan has been an exemplary King who “hath been so clear in his great office that the angels will plead out trumpet tongued against the deep damnation of his taking off“. Ultimately Macbeth believes that Duncan is a good man and a good King and he doesn’t deserve to be murdered in his bed in cold blood. Much later in the sleepwalking scene the horror of murdering an old man in his bed is relived by Lady Macbeth who mournfully laments “yet who would have thought the old man to have had so much blood in him?“. The only other mention of Duncan in the play comes from Macduff who laments that Malcolm is apparently so lacking in virtues despite the fact that “thy royal father was a most sainted King”

So now it’s time for you to get off the fence – do you think if Duncan had been more alert to his perceived weakness as a King; less trusting and more cautious in his choice of road trips that he would still be alive? Or do you think that Duncan is entirely the wronged party; a man whose essential virtue prevented him from foreseeing that his most loyal general would turn against him and God and commit the most heinous crime known to man: regicide.