Posted on January 4, 2013 by evelynoconnor | Comments Off on Kingship: Malcolm (& Ed) 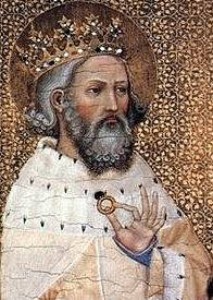 We never actually meet Edward the Confessor but he is the person to whom Malcolm turns for help after his father is murdered. Despite the fact that Malcolm falls under suspicion after he flees the scene of the crime, Edward obviously dismisses these rumours as lies by accepting Malcolm into the English court, offering him a safe haven while he regroups and figures out a way to win back his rightful place on the Scottish throne. Edward is said to have healing powers – he is associated with “heaven” and “grace” and all things “saintly“. It’s clear that he represents absolute good and through his association with Edward, Malcolm also comes to be associated with the forces of good. Meanwhile Macbeth through his crimes, his association with the witches and his reign of tyranny (more of this later) increasingly comes to be associated with absolute evil (only his soliloquies and private conversations with his wife reveal to us that he is not in fact completely evil…).

Malcolm doesn’t actually become King until the final scene of the play but he has a very clear sense of the role a King must play – in fact it is he who lists “the king-becoming graces, / As justice, verity, temperance, stableness, / Bounty, perseverance, mercy, lowliness, / Devotion, patience, courage, fortitude“. Two scenes in particular help us to get to know him better. The first is when Macduff arrives in England to convince Malcolm to march on Scotland. Malcolm is suspicious of his motives and asks Macduff why he has left his wife and children unprotected and why Macbeth hasn’t harmed Macduff in any way?

Perhaps Macbeth is manipulating Macduff in some way –  Malcolm is realistic enough to recognise that when a King gives an order his subjects must obey even if they disagree with their orders (“A good and virtuous nature may recoil in an imperial charge“). Malcolm could be described as paranoid here but his reluctance to trust others is hardly surprising given the circumstances (he’s afraid he’s being lured back home under false pretences so that Macbeth can murder him) so he puts Macduff to the test, claiming that he possesses all manner of vices which would make him an even worse King than Macbeth. Once it is clear that Macduff’s loyalties lie with his beloved Scotland, Malcolm reveals the truth and together they promise to restore Scotland to her former glory. We feel reassured that Malcolm is an intelligent man with a clear sense of the virtues a Kind should possess and of the responsibilites that Kingship brings. His primary concern is to restore Scotland to her former glory. He knows that “our country sinks beneath the yoke. It weeps, it bleeds and each new day a gash is added to her wounds” but he feels confident that divine justice will play its part in their inevitable victory: “the powers above put on their instruments” “the night is long that never finds the day”.

The only criticism I’d make of him is his response to bad news. Back at the beginning of the play when Macduff reveals “Your royal father’s murdered” Malcolm responds “O! By whom“. Not exactly the response you expect from a man who’s just been told that his father is dead! His lack of emotion makes him seem rather heartless and his immediate switch to tactical considerations (“to show an unfelt sorrow is an office that the false man doth easy. I’ll to England“) makes him seem capable of an almost inhuman calm.  Macduff actually seems more upset at Duncan’s death (“O horror, horror, horror! Tongue nor heart cannot conceive nor name thee“) than his own sons do.

Later when it is revealed that Macduff’s wife and children have been brutally murdered he again appears rather cold and callous: he tells Macduff to “dispute it like a man“, not giving him even a moment to process the enormity of his loss but instead urging him to “let grief convert to anger; blunt not the heart, enrage it”.

The second scene where we really see what Malcolm is made of is when he is finally crowned King. Here he finally seems genuinely concerned about those soldiers who have not yet returned from the battle and when Old Siward receives news of his son’s death, Malcolm finally reveals a more compassionate side stating “he’s worth more sorrow and that I’ll spend for him“. Unlike his father he rewards all of those who fought for him equally, with the new title of earls and immediately makes plans to welcome home those who fled Macbeth’s tyranny, including his brother Donalbain. He is decisive and businesslike, proclaiming that “by the grace of God” he will attend to everything else that needs to be done and invites then all to his coronation. It’s only to be expected that he describes Macbeth and Lady Macbeth in such derogatory terms (as a “dead butcher” and “fiend-like queen“). We are left feeling that he will be a capable, wise and fair King but noetheless the essential blandness of his goodness makes him rather boring by comparison to the complex usurper whose head will now decorate the battlements as a warning to those who would challenge the rightful King.

Comments Off on Kingship: Malcolm (& Ed)