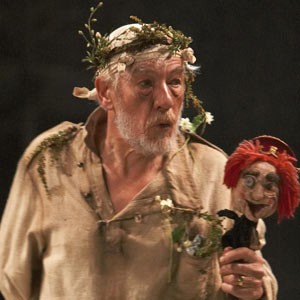 You may be asked to discuss the following when it comes to characters:

Kent and The Fool

WHO does this theme apply to?
HOW / WHY does this character have to deal with this issue?
Do they CHANGE over the course of the play?
Are there any SCENES which highlight this theme specifically?
What are our FINAL IMPRESSIONS of this issue?

In each case you are given a statement which you can fully agree with, partially agree with or completely disagree with. In the most recent Chief Examiner’s Report, students were advised to avoid taking an overly simplistic approach (“I agree 100% that…”). It’s understandable that this would be your first instinct under exam conditions, but remember that a single sentence rarely sums up accurately the complexity and nuance of an entire play. Yes, you’ll look for evidence that supports the statement, but you’ll also need to display an awareness that different phases in the play contain different truths. Your attitude to a character, theme, relationship in the play will change and morph as the play unfolds and the plot develops…

“King Lear is a man more sinned against than sinning” – Discuss

“Lear embarks on a harrowing journey through suffering to self-knowledge. At the end of the play he is a better and wiser man“

“King Lear is not a tragic hero, but rather a victim of circumstances“

“Gloucester is a weak and gullible man, but at heart, a decent one”

“Cordelia shares with her father the faults of pride and obstinacy”

“Cordelia’s dramatic function in the play is twofold: her wisdom highlights her father’s foolishness; her goodness  highlights her sisters’ malevolence”

“Edmund is a sociopath: a charming liar, incapable of remorse, who views men and women merely as obstacles or aids to his ambition”

“Edmund is an admirable villain. At the beginning of the play he has nothing; by the end he is almost King”

“The Fool serves as Lear’s conscience in the play. When he disappears, it is because Lear no longer needs him”

“The fool is an unnecessary distraction in the play King Lear”

“Cosmic justice is denied, yet human justice prevails in the play King Lear”

“In King Lear, whilst characters are initially fooled by appearances, they gradually come to see the truth”

“The play King Lear memorably explores the meaning of love“

“Learning through suffering is central to the play”

“The play King Lear offers us one central experience: pessimism”

“King Lear is one of the greatest tragedies ever written”

“The two plots of King Lear are closely paralleled in theme, character and action, to great dramatic effect”

“What, if any, relevance, does the play King Lear hold for today’s readers?”

“King Lear contains many scenes of compelling drama, but the extremity of the cruelty and violence presented prevents the audience from achieving catharsis. Rather than a release, we feel haunted by what we have witnessed“