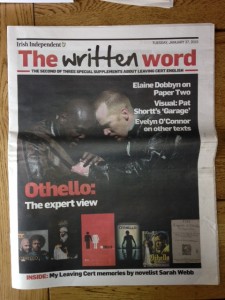 Knowing your individual texts is a vital starting point, but there’s more to comparative than knowing your texts. You also need to be clear what your modes of comparison are so you can draw connections between texts, analysing similarities and differences. The idea behind this section is, after all, the comparison of texts to each other. Once they stand in sharp contrast to each other you’ll find that you can see each text more clearly. With that in mind, consciously embedding linking phrases in your writing (until they flow naturally), answering the question that’s asked (not the one you wish was asked because you’ve it prepared) and aiming to achieve depth in your comparisons are three further skills you need to develop.

At higher level, your modes for 2015 are theme or issue, general vision and viewpoint and literary genre. [At ordinary level, theme is also one of the modes, alongside relationships and hero, heroine, villain]. If you’re not entirely sure what the modes mean, google it, there are plenty of definitions out there. Every year the modes change, so if you’re sitting the LC in 2016, 2017 or later, make sure you check which modes apply to your year.

For theme or issue you might consider some of the following:

Asking the same question of each text allows you to come up with the all important links (similarities & differences) but try not to over-simplify (more on this later).

For general vision & viewpoint you might ask yourself some of these questions:

Alternatively you could just take a beginning, middle, end approach but you must at all times focus on whether the vision/feelings/atmosphere is positive or negative and how this impacts on the reader/viewers experience. Be specific about the atmosphere in the text; the feelings experienced by the audience or reader. Showing an awareness of the way this vision is communicated (through the musical score, the editing, the use of symbolism, stage directions etc…) may also be important, depending on the way the question is phrased.

For literary genre, things are a bit more complicated. Literary genre deals with how a story is told and it’s worth remembering that ‘genre’ has multiple meanings. It can refer to whether a text is a tragedy, a comedy, a morality tale etc. It will also denote the conventions of certain types of stories – science fiction, thriller, romance, horror. On a basic level, it also references the fact that texts tell their stories differently depending on whether they are a novel, play or film. For the novel, this involves the use of descriptive prose with a narrator(s) unfolding the plot for us. In a play, the story is told through dialogue and stage directions. While we may study drama by reading its text, it is often easy to lose sight of the fact that playwrights intend for their work to be performed on stage and not simply read in a classroom. In this light, the performance of actors and indeed the production will be as critical as the text. This also applies to film but we don’t study a film by reading its screenplay or simply watching it, we engage instead with the language of cinema; with framing, camera angles, editing, mis-en-scene, the musical score etc…

You must focus on the aspects mentioned in the question – possibly some of the following, but this list is not exhaustive and you may well focus on other aspects:

If you’re not used to making comparisons, at first your use of these phrases may be a bit clunky. The only way to achieve a natural flow is to practice, practice, practice until making the links happens organically, unconsciously. This is what will lead to good comparative writing.

To say the texts are similar:

These characters react similarly but for completely different reasons….

To point out differences:

A completely different situation is clear in _________

These two texts could not be more different, particularly in thier outlook on _________

Again and again we’re told that those who genuinely engage with the question on the paper are rewarded and those who reproduce a stock learnt off answer are not.

Here’s an extract from the Chief Examiner’s Report

“examiners were pleased when they saw candidates trust in their own personal response and demonstrate a willingness to challenge the ‘fixed meaning’ of texts. The best answers managed to remain grounded, both in the question asked and in the texts”.

Examiners complained that students had pre-prepared answers which they refused to adapt to the question asked. Don’t get confused here: in the comparative section you have to have done a lot of preparation prior to the exam. The similarities and differences are unlikely to simply occur to you on the day under exam conditions and the structure of comparing and contrasting, weaving the texts together using linking phrases and illustrating points using key moments is not something you can just DO with no practice. It’s a skill you have to learn. But you MUST be willing to change, adapt, and select from what you know to engage fully with the question asked.

As we’ve already established, there are two fundamental errors you’re in danger of making when writing your comparative answers

Let’s look at depth in more detail now. Imagine the question is “What did you enjoy about exploring the general vision & viewpoint of the texts you studied?”

Below is the kind of answer that will get you a D2 ( I made up this answer. I’m not slagging off a real student’s work)

“I really enjoyed studying the general vision and viewpoint of my three texts. The opening scene of DAL is quite nostalgic as Michael looks back on his childhood in Donegal but it’s also pessimistic because he says things weren’t really what they seemed and he mentions Fr. Jack coming home but not being nearly as impressive as they expected. We then see the Mundy sisters together, they are a close family but Kate tends to boss them around and the others resent this, particularly Agnes. When she decides they can’t go to the harvest dance the sisters are pissed off but Kate thinks it wouldn’t be right. Similarly the opening scene of IID is quite pessimistic. Michael sits on his own in Carrigmore home for the disabled and he can’t communicate because he is handicapped and can’t speak properly. He tries to warn one of the workers that there’s a cable that might get snagged and someone will trip but they don’t understand what he’s trying to say. He seems really frustrated and I would hate to be in his situation. The first scene in HMB is also pessimistic. Alec is waiting to die and he won’t get in touch with anybody in his family to tell them what’s happening. He doesn’t seem to even care and when the priest comes in he sends him away after making jokes about his own death. So I enjoyed seeing how awful some people’s lives can be because mine is way better and that made me happy”

What’s wrong with this answer?

Now let’s have a look at how to do it really well (this is a difficult skill to master):

“Studying the general vision and viewpoint of my three texts offered me a fascinating insight into the quiet lives of desperation many people lead and I found myself on tenterhooks, rooting for the central characters as they attempted to create a better life for themselves. The opening scene of DAL is full of nostalgia as Michael the narrator launches into a flashback of the summer when Fr. Jack returned from the missions. Despite the closeness of the family unit (Michael remembers his aunts dancing wildly to the music from the wireless) there is an aura of mystery and foreboding, an awareness “of a widening breach between what seemed to be and what was”. This aura makes DAL in many ways similar to HMB (from the beginning of both texts the reader feels something bad is about to happen) but the atmosphere of fear and foreboding are much more pronounced in HMB. The opening scene fills us with unease as Alec waits to die. Unlike the Mundy sisters (DAL) we have no sense that he feels close to his family – in fact he bluntly admits “I love no living person, I am committed to no cause…I have not communicated with either my father or mother”. I found his indifference to his plight deeply unsettling. Thus although I felt compelled to read on, I cannot say I ‘enjoyed’ watching him suffer.

The same is true of IID, where the central character’s difficulties fill the reader with sympathy. Michael’s cerebral palsy and speech impediment isolate him from the other residents but what makes this film subtly (yet significantly) different to HMB is that in IID we can see Michael’s frustration, through a series of close-ups of his face as he tries to communicate with Eileen and warn her of the impending accident (he has seen a vacuum cable snag and knows it will trip someone up). By contrast Alec (HMB) expresses no desire to escape the awful situation he finds himself in. Yet there are also interesting similarities between HMB and IID , for example the complete lack of family support and in some ways this makes DAL the most positive of the three – no matter what their difficulties at least the Mundy sisters have each other. Thus I can honestly say that all three texts captured my imagination, roused my curiosity and engaged my sympathy for the central characters in the opening scene, thus adding to my enjoyment and compelling me to read (or watch!) on.

Why is this so good by comparison?

NOTE: Always check the list of texts to see which ones are prescribed for your year. Above two of the three texts I mention are not on the list for 2015. For our purposes, that’s no harm: I want you to ignore the content and focus on the style of writing instead. But if you write on a text that’s not on the list for your year in the exam you will lose all of the marks available for discussing that text.

This entry was posted in Comparative, Leaving Cert Paper 2. Bookmark the permalink.

8 responses to “Tackling the Comparative”