Posted on August 29, 2015 by evelynoconnor | Comments Off on Originality – Freshness – Energy – Style 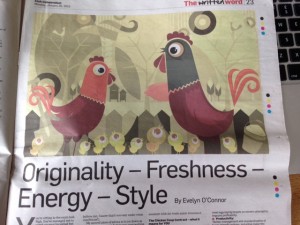 You’re sitting in the exam hall. Sigh. You’ve managed not to vomit up your breakfast but you’re beyond caring how English paper 1 goes as long as it’s Gone Girl sometime soon!

At this point, it’s tempting to choose ‘safe’ options when it comes to the functional writing and creative writing elements of the paper – a letter, a report, a leaflet or a newspaper article. I’m not saying don’t do it: it can be calming to select a format and layout that’s familiar and relatively straight-forward. However, I do have a few words of warning.

Simply replicating the conventions of the format you’ve chosen isn’t sufficient if you’re looking for a high grade. It’s a good start but it’s not enough because as well as gaining marks for ‘understanding genre’, ‘creative modelling’ and ‘control of register and shape’, your writing will also be assessed for ‘originality’ ‘freshness’ ‘energy’ and ‘style’.

With this is mind, how do you engage with the set task but also make your writing stand out in a sea of sameness?

My first piece of advice is to internalise the conventions and layout for each format so that you’re not grasping for these elements in the exam. If they flow naturally, then you’ll be able to free up your creative energies to focus on making your writing fresh and original (and believe me, I know that’s not easy under exam conditions!).

Lastly, if you do come up with something quirky and off-beat, make sure it’s still relevant to the set task and that your register (the formality of your tone and of the language you choose) is appropriate to the audience who’ll be reading what you’ve written. Achieving this balance is quite difficult and requires skill so practise, practise, practise as much as you can prior to the exam.

Let’s imagine a QB as follows, with a quote from the text that precedes it and then a writing task for you to complete.

“If you want a vision of the future, imagine a boot stamping on a human face—forever” ― George Orwell, 1984

Compose a leaflet encouraging people in your community to rally against an injustice you feel must be challenged.

Below, here’s a sample leaflet which achieves a certain freshness and originality, whilst also obeying the expected layout and register. In terms of ‘creative modelling’ it’s borrowing from the movie Chicken Run but it nonetheless uses the formal vocabulary that we associate with the trade union movement.

The Chicken Coup Contract – what it means for YOU

IT IS TIME TO STAGE A COUP

THERE ARE 26 BILLION CHICKENS IN THE WORLD

PLUCK UP YOUR COURAGE

JOIN THE FIGHT AGAINST THE CHICKEN COUP CONTRACT

If you weren’t in an exam, you could do include some fancy graphic design elements, as below, but in an exam it’s not necessary (although, I might vary the size of the heading, sub-heading etc). The writing will speak for itself and the look of it isn’t relevant – you’re not sitting an art exam. 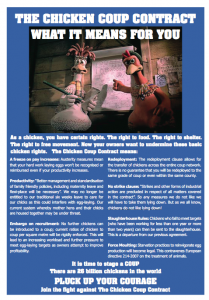