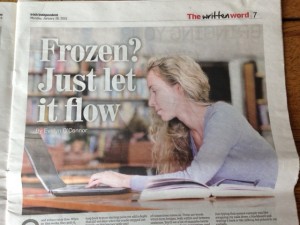 Good writers value flow. When an idea works, they grab it, massage it and make it their own. When it doesn’t, they cut it loose and, like Frozen, they just ‘let it go’.

I’m not saying they don’t get writer’s block – they do!

Nor am I saying that words and ideas flow out of them like water from a tap. Their words are just squiggles on a page, the same as the rest of us. And thank god, or we’d have lots of empty taps and sopping wet pages on our hands, not to mention the cost in water charges!

But what good writers understand, in their deep heart’s core, is the importance of generating flow for the reader. Ideas need to be linked to each other; paragraphs need to be sequenced logically and the reader needs to be eased in – and eased out – of the reading experience.

So how, good reader, do you achieve this in your writing?

First and foremost you should do something with that brainstorm your teacher insisted you create! The ideas are there but which one will you start with? Something to really seize the reader’s attention? A quote? A shocking statistic? Now where will you go next? What ideas have something in common, even something tenuous, that will enable you to segue from one to the next so that they seem like logical progressions akin to steps on a staircase to wisdom? And when the journey’s over and the essay is nearly done, how will you loop back to your starting point yet add a depth that did not exist when the reader stepped out bravely on this journey with you?

Secondly, you need a thread which ties everything together. It can help to think of the paragraphs in your essay as the seven dwarfs. Each one has it’s own defining identity: not sleepy or dopey hopefully, but with recognisable features that make it distinct from all of the others. Yet there’s no question that they belong together! You can look from one to the next to the next and see how they all form an inseparable unit that would be weaker if any one of them went missing or was left behind.

Now that you’ve got a plan, a certain amount of flow will emerge from the sequence you’ve decided to implement. However, you need flow within your paragraphs as well as between them. This is where the third vital element of connectives comes in. These are words which form bridges, both within and between sentences. You’ll see a list of examples below but a word of warning here: connectives used well are almost invisible. Used badly, they’re like your Dad at a wedding with his trousers rolled up, wearing his tie as a headband and playing air guitar. They just look all wrong!

“Ireland undoubtedly has a tradition of neutrality. Clearly this is the will of the people. However, it would be foolish of us to assume that this desire to remain neutral will continue indefinitely into the future. We live in an era of growing global terrorism and were we to be targeted by terrorists we would need to respond, not just for our safety but also for the safety of our neighbours. Furthermore, we are socially, economically and emotionally tied to Europe and so an attack on Europe would also be an attack on us.”

And here’s an example of connectives used badly:

Ireland has a tradition of neutrality. Furthermore this is the will of the people. Nevertheless it would be foolish of us to assume that this desire to remain neutral will continue. We live in an era of growing global terrorism and were we targeted by terrorists we would need to respond. At the same time we are tied to Europe socially, economically and emotionally so to conclude an attack on Europe would also be an attack on us.

Just typing that second example was like scrapping my nails down a blackboard and reading it back is like jabbing hot pokers in my eyeballs.

The bottom line is this: using connectives for the sake of it or because some teacher in the Indo supplement told you to won’t work. You need to understand the words you’re using. You need to know how they work to create flow in your writing.

There is no shortcut to this knowledge. You won’t just innately know how to use connectives properly, unless you’ve been reading voraciously from an early age and engaging in family debates around the dinner table on a daily basis all of your life, so you’ll need to practice. Reading a lot and reading the right kind of material (speeches, debates, newspaper articles, academic essays) will increase your familiarity with connectives and help them to flow more naturally into your own writing.

So you’ve got the guidelines. You’re good to go. And now, to paraphrase Frozen once more, it’s time to ‘Let it flow, let it flow, can’t hold it back anymore…’