Posted on August 29, 2015 by evelynoconnor | Comments Off on Comprehending Texts 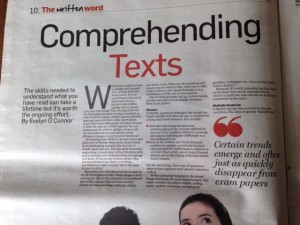 When you’re asked to read a passage and respond to it, certain skills are being tested. Do you understand what you’ve just read? Can you retrieve information quickly and re-phrase it in your own words? Can you read between the lines and comment on what is implied as well as what is openly stated? Can you identify gaps and speculate as to what information might have been deliberately excluded because it didn’t fit with the writer’s agenda? Do you understand the writer’s stylistic choices and can you elaborate on how certain words, phrases or images impact on your emotions?

Developing these skills is a process that takes place over a lifetime. Read more. Read widely. Read challenging material. But don’t let it simply wash over you. You also need to practice responding, to hone your critical thinking skills and to develop your understanding of language and genre. If you’re one of those people who has something to say about everything, provided your logic is sound, this is the place for you to shine!

Remember also that the word text is used in an all-encompassing way. Visual images which accompany the written element are considered part of the text and this includes not just photos but also paintings, cartoons, graphs and book covers. However, the questions will usually specify whether they want you to refer to the written or the visual elements or to a combination of the two in your answer.

Currently, questions relating to the visuals are highly specific and often ask you to connect the written and visual elements. For example:

– How does this image develop your understanding of the concept explored in the text? (this question related to a passage and photos exploring the cliffhanger as a storytelling device)

– How do the written and visual elements combine to capture a particular location and atmosphere? (asked both in relation to an Irish Times article about Grand Central Station and to the setting of Richard Ford’s novel Canada)

For the time being, these type of questions seem to have replaced more generic questions such as

“Write a personal response to the visual image that made the most impact on you. You might consider the subject matter, setting, mood, caption, relevancy, photographic qualities / techniques etc… [use of colour, light, objects, details]” .

However, it’s worth remembering that exams are by their very nature unpredictable so what is a trend one year can fall out of fashion completely by the next!

A similar change has occurred in the style questions. The days of generic “Identify and comment on three features of the writer’s style” type questions appear to be over, and really, that’s no harm. It made it far too easy for students to waffle on in a general way about ‘rhetorical questions’ and ‘vivid imagery’ without really saying anything insightful or specific at all.

You do still get some questions that ask you to identify and comment on genre specific features, for example, features of effective speech-writing; the effectiveness of the passage as a piece of travel writing; or the autobiographical elements you found most engaging. Here you’re being tested on your awareness of the conventions of different genres, so once again, a very close reading of the text in front of you is an absolute must.

However, for the most part, the style questions being asked are now even more specific, so getting up close and personal with the piece of writing you’re supposed to be analysing is an absolute must.

For example, you’ll be given a statement:

– ‘Ford’s writing is characterised by its engaging narrative, lyrical beauty and concrete realism‘.

– ‘One of Heaney’s gifts as a writer was his ability to make complex and profound ideas accessible to the general reader‘.

– ‘The New Yorker has been described as a magazine that informs, entertains and comments‘.

Then you’ll be asked to what extent you agree with this statement and you’ll be instructed to refer to specific features of the writer’s style to support the points you make.

1. Underline and number each element in the question so you don’t skip over or ignore part of the statement in your answer.

2. Don’t feel you have to agree 100% with the statement. You’re asked ‘to what extent’ you agree, so you’re being encouraged to perhaps partially agree, but also to problematise the statement. Maybe it overlooks something significant? Perhaps you agree with some elements of what’s being said but less so with others? Simply agreeing with everything that’s thrown at you prevents you in some ways from showing off your critical thinking skills, because if you just nod and agree, you’re not being at all critical, now are you?

This entry was posted in Comprehensions, Leaving Cert Paper 1. Bookmark the permalink.