I received an email a few weeks back looking for clarification on desciptive essays. Specifically, what different approaches can students take when writing a descriptive essay?

When it came up as an option on Leaving Cert paper 1 recently, the marking scheme stated that students could adopt a “narrative or discursive approach“. Confusion often arises here because when we think “narrative” we think story – plot, characters, setting. And when we think “discursive” we think argument, opinion…

I’ve tried to tease out the ways personal essays, descriptive essays and short stories are related yet distinct in the past, with some limited success. Truth is, the ties that bind them are stronger than any scissors which seeks to cut them apart but with so many marks going for “clarity of purpose” [this includes responding to the topic as well as writing within the specified genre] it’s not surprising that both teachers and students seek clarity on what exactly defines each genre.

Here’s a graphic I created for this very purpose, which first appeared in the 2015 Irish Independent Written Word Supplement. You’ll notice that description forms the trunk, or backbone, and feeds into all three. 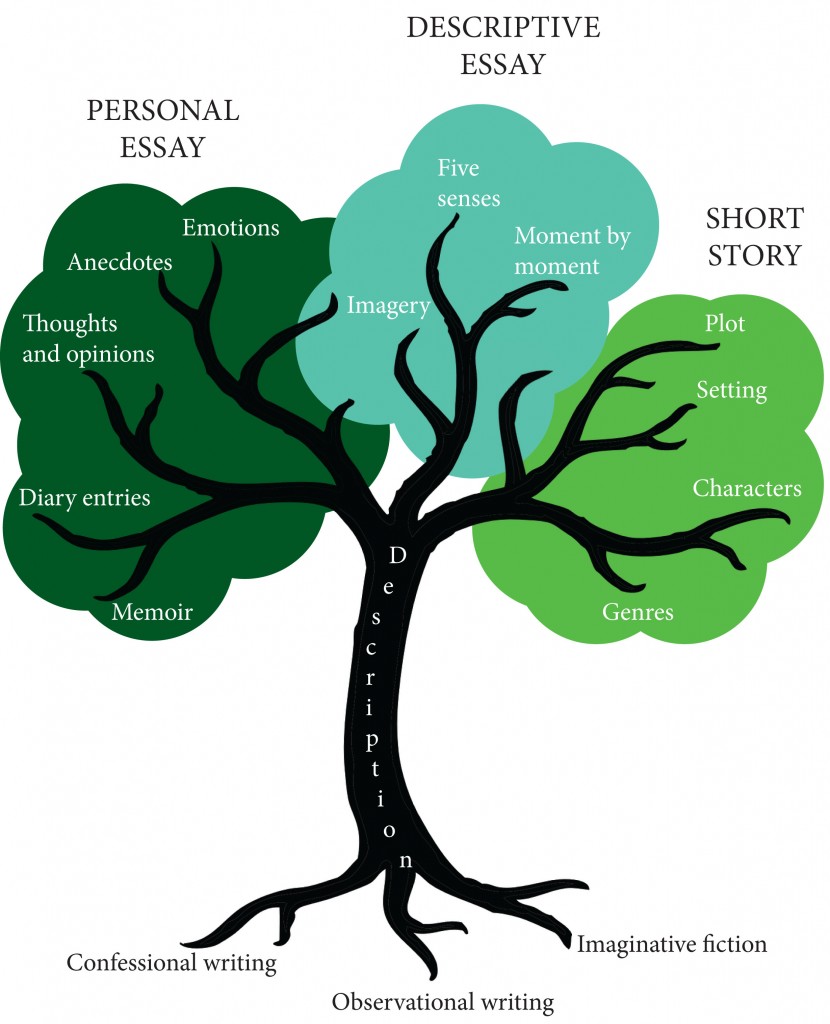 Here are a few descriptive essays taking a narrative approach (I wrote the first one; junior cycle students wrote the other two):

However, a descriptive essay can also take a discursive approach, where the language is descriptive but an issue is also being discussed and the thoughts, opinions, knowledge and understanding of the writer come into play.

Have a look at this example which is extremely descriptive (it uses metaphor throughout) but which is also discussing an issue – bullying: http://leavingcertenglish.net/2014/03/abcs-of-bullying/

Well, when an issue is being discussed it’s discursive [all paper two essays are discursive] but a writer can achieve wonderful aesthetic effects, and really engage the reader, if they combine discussion and description.

For me, it helps to remind myself that the boundaries between genres are fluid, and as long as a student embraces some elements of description if asked to write a descriptive essay, they won’t be penalised for the approach they take.

You might also want to take a look at this essay I wrote: http://leavingcertenglish.net/2011/05/ict-in-education-conference/

It’s a perfect example of the fluidity of genres.

It begins with a poem [hence, aesthetic use of language]
It goes on to discuss an event and an issue – use of ICT in education [hence, discursive]
It takes a descriptive approach throughout [using lists and metaphors and moment by moment description]
It ends by linking to a personal story – the death of my friend [hence, a personal essay with a narrative thread holding it together].

I just thought I’d post my reply to this query, as coming up with an answer really got me thinking in depth about how fluid the boundaries between genres can sometimes be… that’s not a bad thing, but it does make assessing with genre as one of the criteria that bit trickier. To my mind, as long as it’s clear that the student is controlling their use of genre conventions, rather than being oblivious to genre, then they should be ok. On the other hand, if a student comes across as having no awareness of genre, audience and register, that’s where problems arise…

One response to “Types of descriptive essay…”