We’ve been revising Kingship in class this week. We’ve got fancy infographics analysing the models of Kingship (or future Kingship!) represented by Duncan, Macbeth and Malcolm (see below) and I’ve been trying to get it to hit home that it doesn’t really matter WHAT opinion you offer as long as you can back it up with relevant quotes and examples. 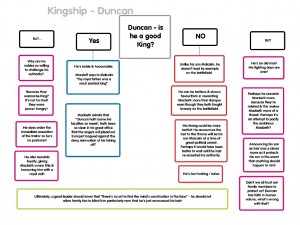 In order to illustrate why it is that teachers & examiners get so bloody upset when students learn off notes and vomit them up in the exam, I took two exam questions, both of which relate closely to the theme of Kingship.

The first was “Macbeth is about power – its use and abuse”

The second was “Kingship, with all its potential for good and evil, is a central theme in Shakespeare’s Macbeth”

Then I typed my response – off the top of my head – to each question, in the form of a single paragraph looking at the character of Duncan. The result was far from polished (I’m not used to live typing in front of an audience) and I’m pretty sure my paragraphs would be longer in an exam, but the exercise was nonetheless a good one.

My aim was to show my students that:

(a) You can know the info, you can have an opinion, but you cannot know the exact words you’ll use until you see the question.

(b) The words from the question must be integrated throughout your response.

(c) You cannot possibly include everything you know about a character so you must simply select some of what you feel is relevant to the question. In English, you are not losing marks for the things you don’t say, you are only gaining marks for the way you use SOME of what you do know to respond to the Q asked, all the while offering your opinion.

So what did we do next?

Well we underlined the important words/concepts in this question:

“Macbeth is about power – its use and abuse“
Then I live typed this (in about 5 minutes) as a sample (mini-)paragraph.

Duncan is the most powerful individual in the Kingdom as the play begins. He uses his power wisely – as Macduff later notes he is “a most sainted King”. Even the man who is plotting to murder him, Macbeth, observes that he “hath been so clear in his great office that the angels will plead out trumpet tongued against the deep damnation of his taking off”. Absolute power is not without its challenges however. Duncan’s rule is challenged by Macdonwald & an invading Norwegian army who view his meekness as King as an opportunity to seize power. Ultimately, although Duncan does not ‘abuse’ the power he has as King, he is perceived as weak and this allows others to challenge his rule. In this end this is why he dies!

[Reading this over it is very short.I’d probably add a few more lines in an exam but I was conscious of my audience waiting patiently for me to finish!]

Then we turned to the other question.

“Kingship, with all its potential for good and evil is a central theme in the play”

Then I live typed this (in about 5 minutes) as a sample (mini-)paragraph:

The first King we meet in the play is the “sainted” Duncan, who has used his position in a noble, wise and fair manner. Even the man who is plotting his murder admits that Duncan has been “clear in his great office”. He is not a perfect King, he certainly makes mistakes, rewarding Macbeth more effusively than Banquo, with a title and a royal visit as opposed to a hug. This favouritism may explain why he has made enemies in the past. Nonetheless, his murder is shocking and immoral and nature reacts with horror (we hear the “owls scream and the crickets cry”) because the King was viewed as God’s representative on earth. Ultimately, once a usurper, in the form of Macbeth, takes over, the potential of Kingship to become a force for evil in Scotland is unleased.

I could have prepared the examples in advance, but I think they might have missed the point, which is that your brain needs to be ON – needs to be on FIRE – thinking thinking thinking even as you write (not remembering, remembering, remembering stuff you’ve learnt off!). I also reassured them that my total recall of the play & all the quotes is just a function of having taught and studied the play about 9 times!!! And obviously I’ll find this easier than they will cause I practiced this skill for six years of college! And ever since…

I didn’t want the whole thing to become me showing off. It was a demonstration not a telling off (why aren’t ye doing this? blah blah blah blah blah, rant rant rant rant rant – I don’t know any student who responds to that tactic!). Still I do think I scared them a bit. Oops! Ah well, if it helps them to do better in the exams perhaps they’ll forgive me! Having taught in a boys school previously, dare I risk being accused of sexism and suggest that girls – especially girls in an all girls school – can sometimes get obsessed with the idea of having the RIGHT answer, as opposed to just coming up with the answer that makes the most sense to them personally…

Right, I’ll shut up now before I start offending people!!!

Here are the other infographics. They now have to take these, pick one of the two questions above, and write a full essay, ensuring that they engage fully with the question throughout their answer! Hopefully it’ll help them improve! 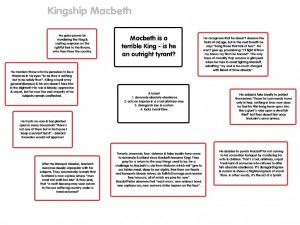 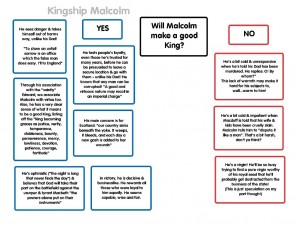 This entry was posted in Macbeth, Shakespeare, Teachers. Bookmark the permalink.