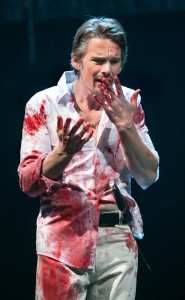 Last class Friday evening isn’t the most productive time to have Leaving Cert English, but we did start looking at the question “Macbeth contains many scenes of compelling drama” – discuss.

Compelling means “captivating” “irresistible” “commanding attention” –  in other words, you feel like you can’t look away. So which scenes pique our interest, demand our absolute attention, suck us in and make us perch on the edge of our seats or weep uncontrollably?

If your answer is “none, it’s a shite play” then stop reading now. Go have a cup of tea and know that I am trying my best not to judge you for your failure to appreciate the genius of Shakespeare.

I had earlier googled a couple of scenes I think are particularly compelling in the play but I’ve since revised this list in my head to include some new ones:

This is basically your classic horror movie opening. There’s “thunder, lightening..rain” & a looming battle, all introduced to us by a gang of hideous witches. Scarier, granted, for a superstitious Shakespearean audience than for us – after all, they lived in the era of the inquisition & counted burning witches at the stake as one of their top viewing passtimes of a Saturday! These evil creatures “hover through fog & filthy air” but this is no innocent game of quidditch; they are planning some serious mayhem! They plant the notion that they will meet Macbeth upon the heath which rouses our curiosity. This is a compelling start, particularly for those who are happy to enter the space that all theatre demands – the “willing suspension of disbelief“.

However, if the idea of witches is enough to make you giggle, you may want to scratch this one off your list of compelling scenes in Macbeth.

I wanted to find a version of this which was convincing but not so over-the-top dramatic that it makes you roll your eyes. I failed. I’m plonking this one here so you get a sense of the drama of the moment but imho, this guy has overdone it. If he toned it down, made it less hand-on-heart-sincere, and more like a slightly (as opposed to completely) unhinged guy talking to himself out loud, it would be more to my taste!

This soliloquy is tense and compelling and rather like listening in on someone in the confessional box. Here is this guy who we’ve been told is “full of the milk of human kindness” battling with his conscience and confiding his innermost thoughts and fears in us. He examines in arrestingly honest terms the depth of his desire, admitting that if he could do it and get away with it on earth he’d “jump the life to come“. Imagine wanting something so badly you’d give up the prospect of eternal life to have it? He also accepts that committing this crime of regicide would be utterly wrong, as “this Duncan hath borne his faculties so meek, hath been so clear in his great office that the angels will plead out trumpet tongued against the deep damnation of his taking off“. This image of angels trumpeting the alarm if Duncan is murdered is so vivid that we’re not surprised when he concludes that he can’t get way with it. Picturing the reaction to the crime as angels “blow the horrid deed in every eye that tears would drown the wind”  is enough to make him reconsider.

3. Lady Macbeth’s manipulation of her husband

I defy anyone to watch this and not think “what a bitch!”. Even if afterwards we factor in her determination to help her husband fulfil his potential and partially excuse her behaviour, when you first see how vicious and determined and manipulative she is in this scene you cannot help but be shocked and horrified and kind of in awe of her complete and utter ruthlessness. If I was Macbeth I’m pretty sure I wouldn’t be able to withstand being called effeminate & a coward & disloyal & a liar! Her best line here – the most compelling & shocking line of the play so far if you ask me – is where she proclaims ““I have given suck, and know how tender ’tis to love the babe that milks me – I would, while it was smiling in my face, have plucked my nipple from his boneless gums and dashed his brains out, had I so sworn as you have done to this” Ouch! She’d apparently kill her own child before she’d break a promise to her husband! This woman is a genius at emotional and psychological manipulation. The cow!

Why is this compelling? Well, because this is supposed to be the greatest moment of his life – the Banquet to celebrate his coronation as King. It’s what he’s dreamed of and hoped for and even, ultimately, killed for. And now here he is and instead of honour and glory, there are blood-soaked killers at the door and the ghost of the man he just had murdered appears before him, also covered in blood, haunting him, accusing him. “Never shake thy gory locks at me” Macbeth screams at thin air. Talk about awkward! God love his poor wife trying to keep the party going…

Poor Macbeth! When what you expect turns out to be the complete opposite of what actually happens, this is called dramatic irony, caused by a reversal of expectations. [If you’re not sure that you understand irony, and for the best explanation of irony I’ve ever seen, click on this link]. In the case of Macbeth, it’s also poetic justice; poetic because he deserves to suffer, rather than celebrate, as he settles onto the throne that should never rightfully have been his. He doesn’t belong in this role so it’s fitting that he never manages to fit the role either!

No-one else in the room can see Banquo’s ghost so either Macbeth is insane or those who return from the dead only appear to those they wish to communicate with. Either way, it’s pretty awkward for the assembled guests who try not to stare and probably look at their feet, their hands, their plates – anywhere but at their psychotic newly crowned King who’s acting like a total lunatic.

Is it any surprise that the rumours about Macbeth are openly discussed in the scenes which immediately follow the banquet? I doubt many of the nobles liked him anyway – he’s been spying on them (“there’s not one of them but in his house I keep a servant fee’d“) so they may have been staying quiet up to this point out of fear, but now that he’s been publicly humiliated and one of their own – Banquo – has been murdered, they’re not likely to put up with him for too much longer. The first chance they get, they’ll turn on him.

This scene is utterly compelling for the audience because we the audience now feel that his downfall is inevitable. Everyone suspects him, so it’s surely only a matter of time before he is openly challenged and defeated! Now that’s compelling drama. We just sitting in the audience waiting to see how and when his downfall will occur. If we’re secretly enjoying his misery, the feeling we’re experiencing is schadenfreude. Watch this video for an explanation of what this word means:

5. The murder of Lady Macduff & her children

This clip has a bit of a lip sync problem but I think it captures the innocence of the victims quite well.

There are a couple of things worth nothing here. This is the first time we have witnessed the murder of innocent women and children in the play. Banquo may have been innocent of any wrong-doing, but he did represent a threat to Macbeth. Here we see the complete disintegration of any remaining morality in Macbeth. He’s willing to wipe out entire families simply because the head of the household has not attended his coronation banquet. As an audience we also cringe in horror at the sadism of the killers. Who does this? Who makes a mother watch while her child’s throat is slit? This is the moment where we really question our allegiance and start to hope Macbeth gets caught. This scene also provides Macduff with a deeply personal motive for going after Macbeth (his political motive was already quite strong, evident when he lamented “bleed, bleed, poor country“) and this is turn will create even more poetic justice when Macduff finally confronts Macbeth.

Do I need to explain why it’s compelling drama to watch Lady Macbeth disintegrate, unconsciously revealing her innermost secrets, torn apart by remorse, ravaged by guilt and caught in the grip of a hideous O.C.D as she feverishly attempts to scrub out the “damned spot” which has become an inescapable reminder of the evil which she earlier invited into her life? Here is dramatic irony at it’s most dramatic as we witness the completion of her transformation from arrogant architect of evil (“a little water clears us of this deed“) to but a tragic shadow of her former self (“all the perfumes of Arabia will not sweeten this little hand“).

7. Macbeth’s soliloquy “Out Out”

So here is the man who believed that if only he could become King and get away with it, all his worldly ambitions would be achieved and he would live happily ever after. Now, he’s telling us that life is a farce, a joke, a meaningless “tale told by an idiot“.  The depth of his despair, the power of his words, the suicidal intention behind them and the fact that he realises too late that it was all for nought all make this a compelling speech but most of all, it is the fact that it is delivered immediately after he receives news of his wife’s death – this is what makes this scene so awful. His “dearest partner of greatness”. the woman he would rather kill for than disappoint, is dead, and he is so far gone, so filled with despair, that he reacts not with tears or anguish or denial but with calm acceptance and an acknowledgement that there was nothing left for them to live for anyway. How the mighty have fallen…

Of course, when the tragedy is over and he’s dead and she’s dead and we’re still alive, we also experience the wonderful catharsis* of knowing that human beings really can f*ck up really badly, but hey, it wasn’t us, we’re fine, so off we go into the night, determined not to kill anyone on our way home, cause if we didn’t know it before, we all know it now – that can only end badly!!!

Have you ever wondered why you like horror movies? Or violent video games (even though you’re not a violent person in real life)? Or Eastenders (it’s so bloody miserable and depressing all the time)? Or books that make you cry (I’m not a fan of “PS I Love You” but many of my – female – students love it)?

Some people suggest that we like all of these things because they’re not real. We can experience scary things in a fantasy way without putting our ‘real’ self in danger -the fear/rage/depression/sadness leave us as soon as we switch our brains off from the movie/video game/telly/book.

This process of temporarily experiencing negative emotions and then ‘cleansing’ them is known as catharsis. We enjoy this process because it helps us to lose ourselves in someone else’s life for a while (if our own life sucks) or to appreciate how good we have it (if our own life is better than what we’ve just watched) when the movie/video game/telly/book ends.

As an aside, this video popped up while I was searching youtube. I’ve always had a bit of a thing for Ethan Hawke and now this is making me want to go see it on Broadway… wishful thinking as it finished on the 12th January. Wish I’d googled it before Christmas, you never know what Santa might have delivered!

This entry was posted in Macbeth and tagged Compelling Drama, english, macbeth. Bookmark the permalink.