What’s wrong with the Leaving Cert? 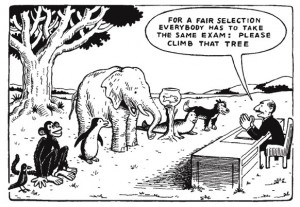 Unless you’ve been hibernating under a rock you’ll be aware that the Leaving Cert results came out this week. As usual, the media focused almost exclusively on the two or three geniuses who managed to achieve near superhuman results, in some cases 9 A1s! These individuals are undoubtedly exceptional on so many levels and celebrating exceptional human beings in every field of human endeavour is a truly wonderful thing. I for one would hate to live in a world where individual achievement was ignored instead of exhalted.

What about the exceptional individuals whose talents aren’t recognised or rewarded by the Leaving Cert? Are they to conclude that the things they are good at simply don’t matter or have no value in an educational context? Talents like leadership, teamwork, creativity and innovation – are these things  really irrelevant when assessing their time at school and awarding college places?

I’ve been thinking about the Leaving Cert a lot over the last few months. What kicked it all off was an #edchatie discussion back in April on the possibility of achieving “A Better, Fairer Leaving Cert”. A few short weeks later I was delighted to hear the articulate and intelligent Fionnghuala King lambast the Leaving Cert at our school’s Graduation Mass  (you can read excerpts of what she had to say here in the Mayo News). Then the day of the results thejournal.ie rang me for reaction to the results and to the exams system itself and 24hours later I was in the middle of a heated row with George Hook on Newstalk about the relative merits of the current system. Only four short days after the results and after a summer of exhausting media interviews The Irish Times finally acknowledged that I might have something of value to say and yet I find myself still grasping for a coherent alternative method of assessing students achievements at the end of five or sometimes six years of secondary education.

For what it’s worth here are my thoughts. I’m aware they are often contradictory but this is a complex issue!So let’s embrace the paradoxes and tease them out…

That’s all I’ve got for now. Lots to grapple with.

3 responses to “What’s wrong with the Leaving Cert?”