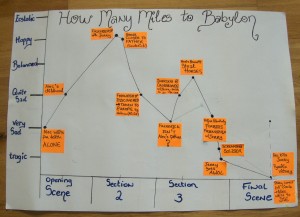 As I mentioned above, the gv&v changes during the course of any text. One exercise I did with my class was to draw up a graph – see photo above. The vertical axis went from tragic at the bottom to blissfully happy at the top. The horizontal axis went from the beginning (on the left) to the end (on the right) of the text. Then we picked maybe eight key moments and plotted them on the graph. This gave us a clearer sense of how the gv&v changed, ebbed and flowed over the course of the text from beginning to end. However it is a little simplistic – you need to offer a more complex discussion  than “happy/sad” (nostalgia, longing, frustration, injustice, tragedy, triumph, humour are all more specific words that spring to mind!) AND you need to think about whether the author offers you a positive, fond and uplifting view of human beings or a deeply pessimistic indictment of human beings’ flaws and foibles. Think about the writer/director’s vision of the society the characters inhabit. What decisions has the writer/director made as to how the text begins and ends. Does the story begin and end at the same point (as in Babylon)? Have the characters achieved anything in the intervening period? Is the text a gradual journey towards enlightenment and self-fulfillment? Or does everything end badly, despite the characters best efforts to achieve happiness?
—
Because the concept is quite multi-faceted, try to simplify your overall essay structure.
Compare the beginning gv&v of each text.
Then compare gv&v about a third of the way in.
Next compare gv&v about two thirds of the way in.
Finally compare the gv&v of the endings.
—
And of course the most important thing is to tie them together in the way that I described in the post “Cracking the comparative“.
Hopefully that will clarify things somewhat!
This entry was posted in Comparative and tagged general vision and viewpoint, leaving cert english, what is. Bookmark the permalink.